Synthetic nitrogen (N) fertilizer is one of the most expensive and energy-intensive inputs to produce in agricultural production systems worldwide. Inefficient use of N fertilizers in agriculture leads to a host of environmental and economic concerns. To alleviate the environmental burdens and increase farming profitability, it is critical to identify sustainable alternatives to improve crop NUE. In my group, we aim to improve NUE from the genomics, phenomics, and microbiomics perspectives.

In the past decades, the genetic gain through continuous hybrid releases from public and private sectors has contributed substantially to the yield improvement. Prior to the 1960s (old-era) in the U.S. Corn Belt, the selection primarily occurred in N-limited agricultural systems. Since the 1960s or post the Green Revolution (new-era), as inorganic N fertilizers became increasingly available, maize selection has been mainly conducted in systems where N was not the limiting constraint on productivity or yield. The shifted N condition has changed the breeders’ preference to select hybrids with high planting density to take advantage of higher rates of N fertilizers, resulting in a number of physiological and morphological changes in maize. However, to what extent the shifted N conditions have reshaped the genomic architecture and regulatory networks in affecting the N assimilation and mobilization has not been systematically studied. Here, we aim to reveal the genomic changes during recent maize improvement in the N oversupplied conditions and validate the functional consequences of these genomic changes. 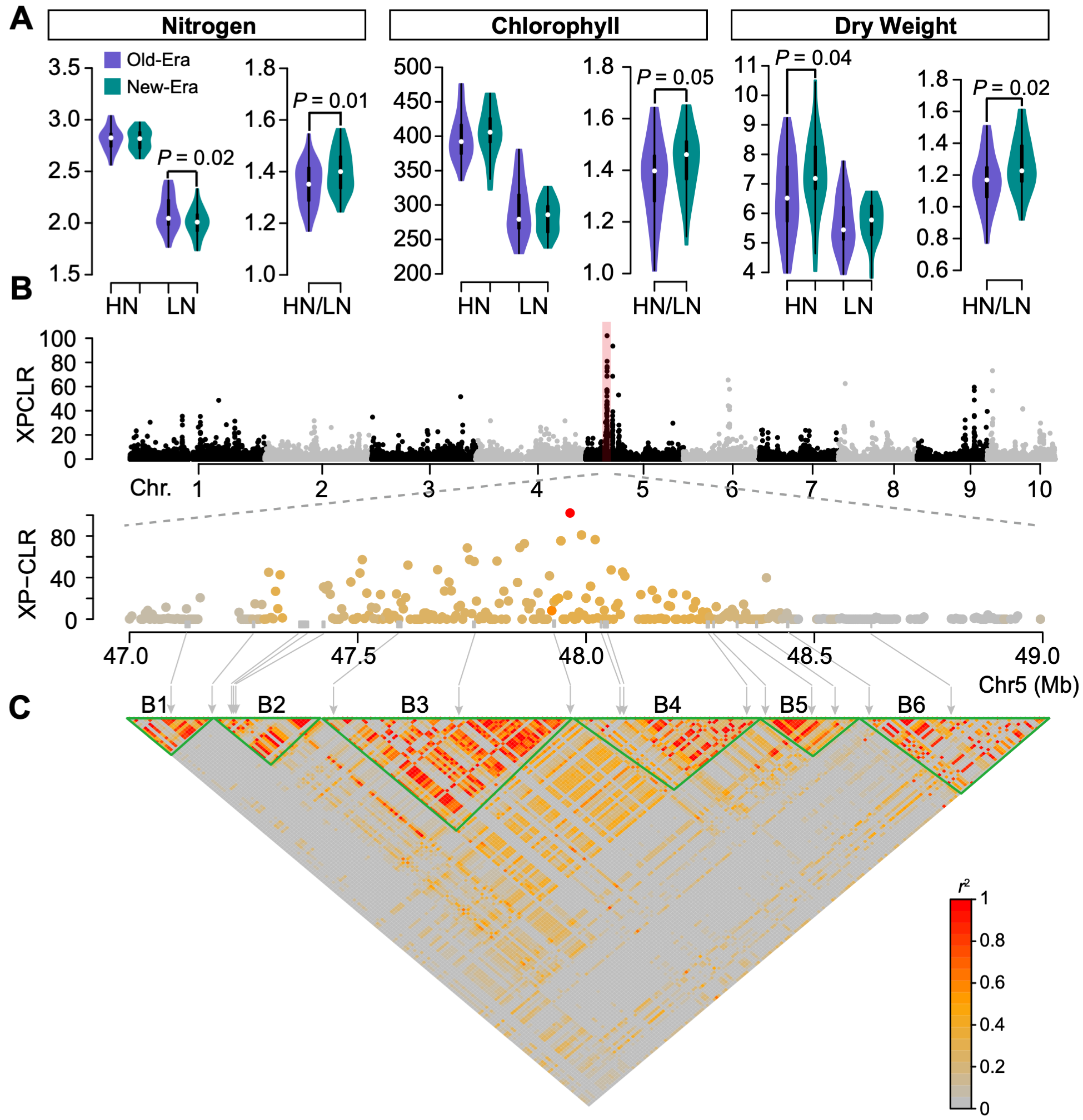 Plant roots are colonized by thousands of microbial species that can improve plant health and performance, such as solubilization of nutrients, competition with pathogens, phytohormone production, and N fixation. Harnessing these beneficial microbes in maize cropping systems provides an attractive opportunity to reduce dependence on chemical N fertilizers. Our study suggested that the plant host selecting the beneficial microbes predominantly through negative selection (a form of natural selection to select against mutations that are deleterious to fitness), resulting in low allele frequencies of the deleterious mutations across the host genome. The plant hosts preferentially selected beneficial microbes to provide promising targets for in-depth investigation of the symbiotic relationship, especially the microbes for promoting NUE. Here, we will harness the beneficial microbes for maize NUE study from both the plant genetics and plant-associated microbiome perspectives. 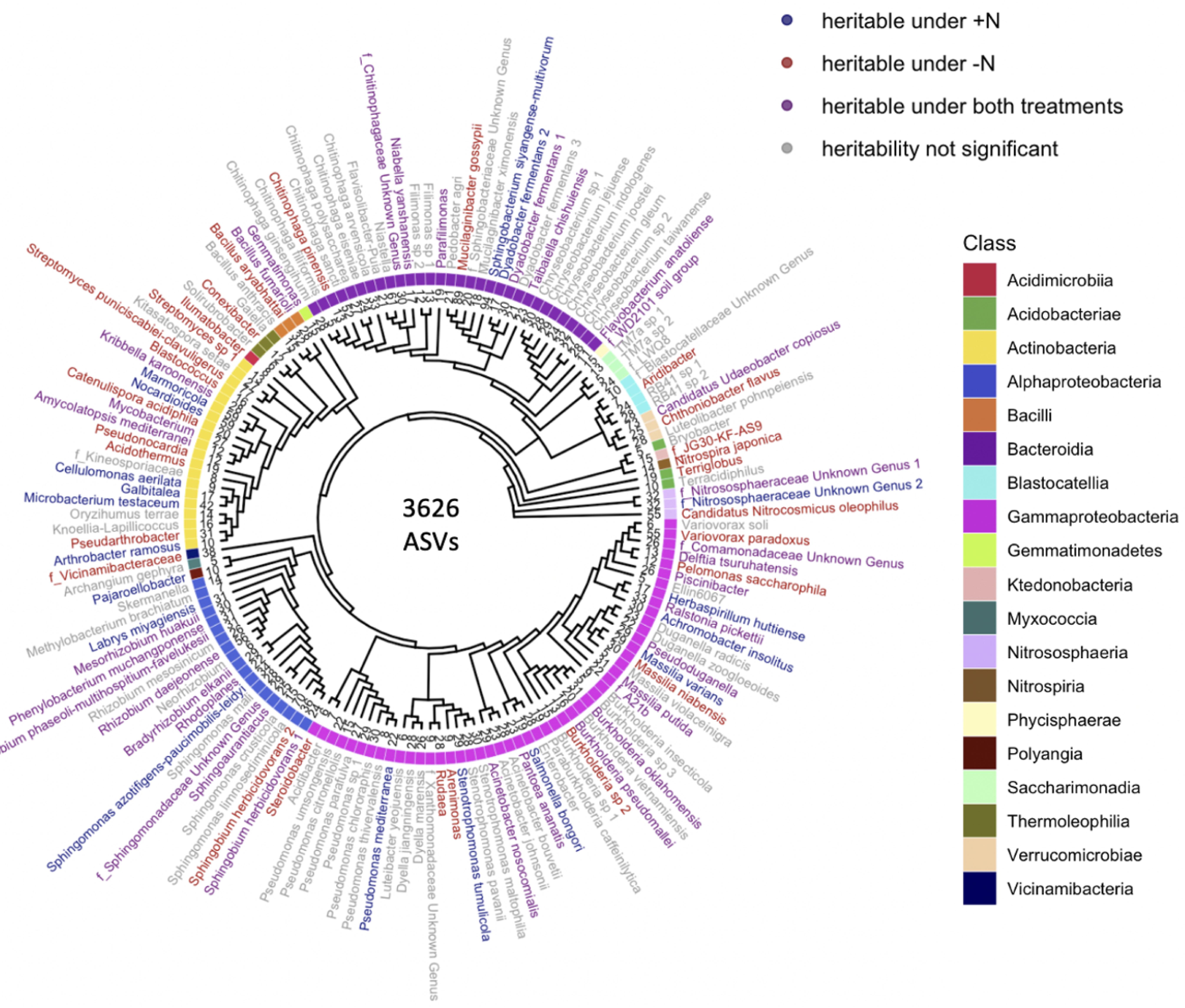 In collaboration with several colleagues in phenomics, my group has started to expand the research area on high throughput phenotyping (HTP), with a focus on in-field phenotyping using unmanned aerial systems (UAS). Over the years, we have collected UAS imagery data on several maize diversity panels. To analyze these image data, we developed a UAS image processing pipeline to extract clipped plot-level images and then apply pixel filtration algorithms to remove the non-foliage elements. In the future, we will continue to develop methods to extract physiological and morphological traits (i.e., tassel detection using machine learning methods) from UAS-based imagery data and use these data to map genes and facilitate plant breeding. 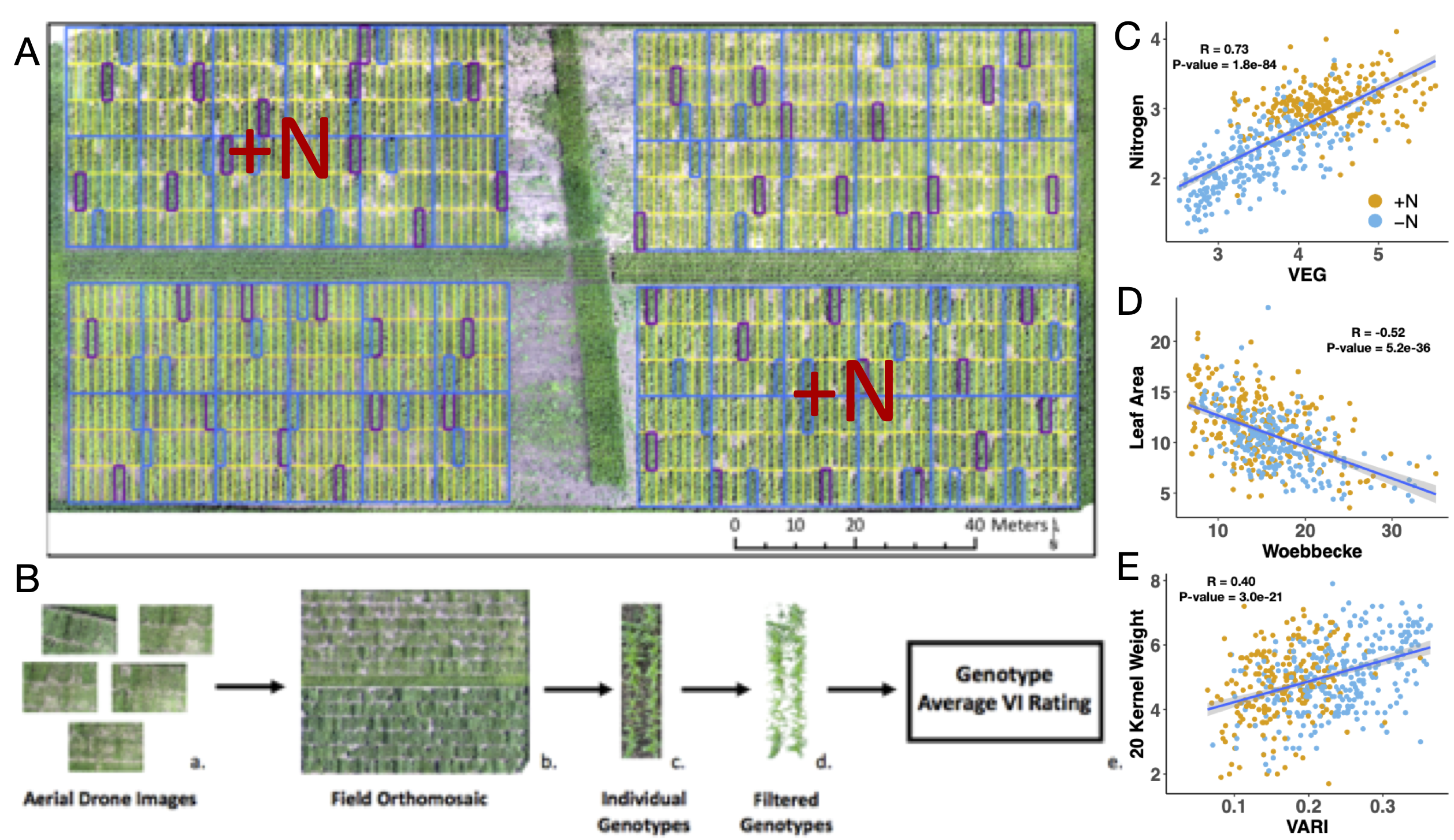 Additive and dominant modes of inheritance of deleterious alleles have been investigated in numerous studies; however, very few studies reveal epistasis’s relevance in the evolutionary processes. Biological knowledge and genomics studies suggest that physical interactions, or functional epistasis, should be prevalent across the genome. For example, the physical interactions of promoters and enhancers orchestrate spatiotemporal gene expression and transcriptional regulation. Understanding the role of genomic variation, including the methylation variation, in affecting genome-wide patterns of gene regulation and chromatin interaction is critical for dissecting the phenotypic variation. It is equally important to reveal the selection forces in shaping the patterns of these genomic and epigenomic variations. The knowledge generated by these studies is critical in understanding the evolutionary forces in shaping functional genomics and can be translated into future crop improvement. As the genomic profiling of the physical interactions becomes available, our lab will integrate the physical interaction data into the classical epistasis model. We will estimate the effects of the physical interactions on the phenotypic trait variations and reveal the long-standing questions regarding the relative contributions of epistasis to phenotype. 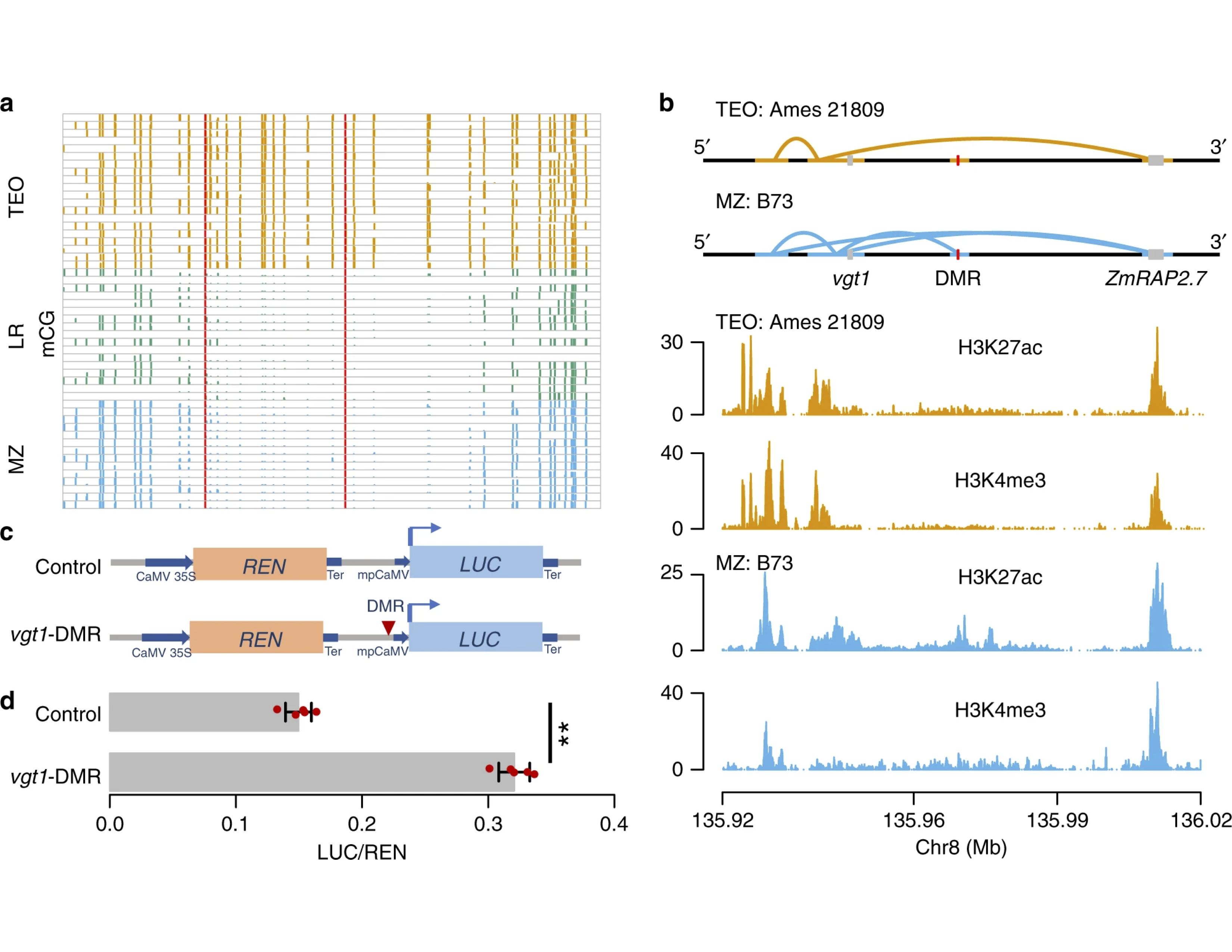 Levels of CG methylation around a differentially methylated region (DMR).

3. Statistical modeling between genotype and phenotype

The third research area in our lab focuses on bridging the genotype-phenotype (G2P) divide using statistical modeling approaches. In this direction, we will develop models to integrate various large-scale biological datasets generated in the other two areas, including phenomics, genomics, transcriptomics, methylomics, microbiomics, and functional annotation datasets. The overarching goal of this research area is to build tools and statistical methods to facilitate crop improvement. These tools and methods will help to facilitate plant breeding and genetics research for a broader community. 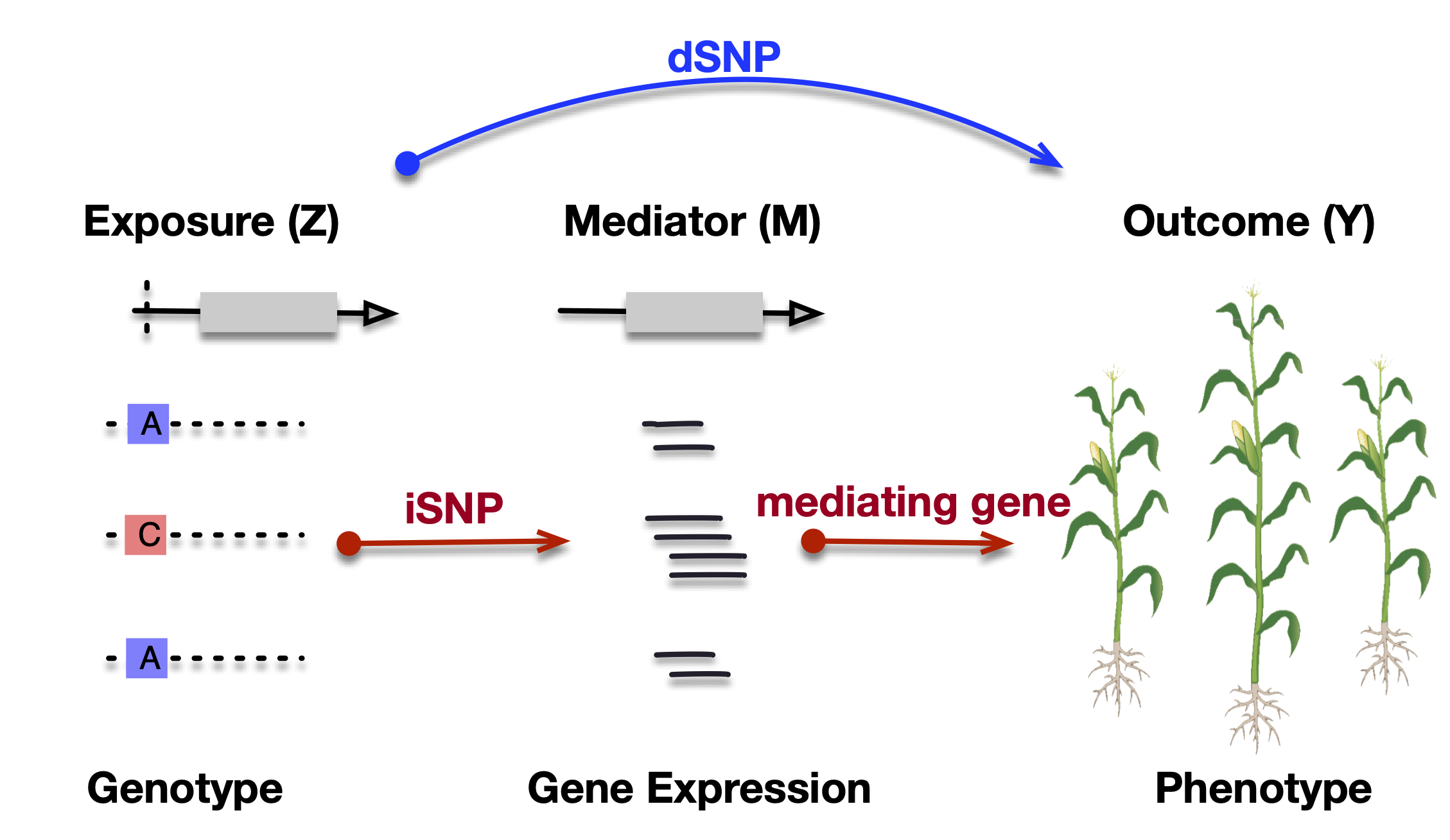 A graphical depiction of the high-dimensional genome-wide mediation analysis.